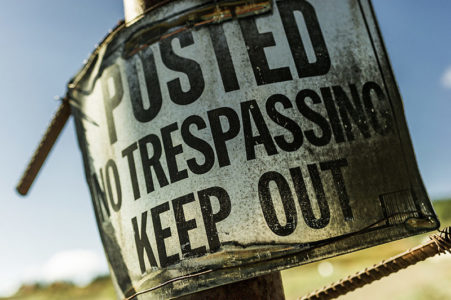 Have You Been Charged With A Trespassing Offense In New York?

DO NOT PLEAD GUILTY TO TRESPASSING CHARGES IN NEW YORK!

Below, The Law Offices of Michael H. Ricca P.C. help explain the nuances between New York State trespassing charges, as well as the potential consequences of a conviction. It is important to remember that every case is different and the circumstances of each will play a role in the possible defense and outcome of your charges.

Gambling your future on a public defender or pleading guilty in hopes of a lesser sentence is not the way to beat a trespassing charge. Contact The Law Offices of Michael H. Ricca P.C. if you or a loved one have been charged with a trespassing offense in New York State.

Penal laws are those statutes that are enacted by the state’s legislature and enforced by law enforcement and the judiciary system. The New York State Penal Law defines and categorizes crimes recognized by the State. It also delineates the penalties for these crimes.

In New York State, trespassing is criminalized through four different sections of the State’s Penal Law. However, all are based on the criminal act of entering private property without permission or consent from the owner to do so. This may or may not include the intent to commit another type of crime, such as burglary or assault. It also extends to individuals who remain on a property despite being asked to leave.

That being said, there are several different elements that affect the severity of the trespassing offense. The type of property being entered, whether a weapon was used, and the actions or intentions of the individual being charged are some of these determining factors.

To help you understand the differences between these charges, explanations of how New York State defines these offenses is discussed below.

Trespass, per New York State Penal Law 140.05, occurs when an individual knowingly enters a building or property without the privilege to do so. It also includes unlawfully remaining on the premises. Under this law, trespass is a violation.

Criminal Trespass in the Third Degree is more serious than a 140.05 trespass charge. What distinguishes this offense from a trespass violation, however, lies in the condition of the property being unlawfully entered or remained in. The conditions that make this a third degree offense include at least one of the following:

According to New York State Penal Law 140.10, Criminal Trespass in the Third Degree is a Class B Misdemeanor.

First, if the property is considered to be a dwelling, that is automatically considered Criminal Trespass in the Second Degree. A dwelling is defined by Section 140.00 as a building that is typically occupied by an individual for lodging at night.

Secondly, if you have been convicted and designated as a Level 2 or Level 3 sex offender, you are required to maintain current registration as such. As a registered sex offender, you may be charged with Criminal Trespass in the Second Degree if you knowingly enter or remain within a public or private school attended by, or formerly attended by, your victim. There are some exceptions, however. If you attend the same school, are the parent or legal guardian of a child who attends the school or an activity there, or have a limited authorization from the superintendent permitting you to be there – you have not committed this offense. Additionally, if the school is your designated polling place and you have entered the facility with the express purpose of voting, the act will not be considered trespassing.

Under Section 140.15, Criminal Trespass in the Second Degree is a Class A Misdemeanor.

Criminal Trespass in the First Degree is the most serious trespass offense you can be charged with in New York. As such, there is an element that is unique to this degree of trespassing: the possession of a weapon.

If you, or another individual involved in the trespass event, knowingly enters a private property while in possession of an explosive device or deadly weapon, including a firearm as defined by New York State Penal Law Section 265.00, you can expect to be charged with this offense.

Because of the dangers associated with being armed with an explosive device or deadly weapon and the potential consequences of using such an item, this crime is considered a Class D Non-Violent Felony.

A NOTE REGARDING BURGLARY

Burglary offenses are similar to trespassing ones. However, they include the intent to commit another crime while unlawfully entering or remaining on private property. Because of the requirement for intent, many burglary charges will be accompanied by a trespassing charge. This is a tactic commonly used by prosecutors to ensure at least one charge will lead to an indictment. Multiple charges and convictions may result in much more severe penalties. As such, it is essential that you contact a reputable and experienced criminal defense law firm, like The Law Offices of Michael H. Ricca P.C. today.

While only one of the above trespassing charges is considered a felony, all have the potential to result in legal and personal consequences. As an experienced criminal defense law firm, we know all too well how devastating even the smallest charge can be.

Now that you understand the differences between these crime classifications, the below table outlines the potential jail time and fines you may face if you are convicted of a trespassing offense.

The fines listed above are not the only financial obligations you may be subjected to. Additional surcharges, fees, and victim restitution may be required as part of your probation, jail, or parole. Criminal Trespass in the First Degree, for example, is a Class D Non-Violent Felony. As such, you may be fined $5,000. However, mandatory surcharges ($300), additional surcharges ($170), monthly parole costs ($30 per month), and a victim restitution fee (up to $15,000) may also be required. These costs are in addition to the $5,000 fine.

As you can see, a conviction or guilty plea in New York State can be costly, in addition to resulting in your incarceration.

Incarceration and fines are often the most commonly talked about consequences of a criminal conviction. However, they are not the only ones you should worry about.

At The Law Offices of Michael H. Ricca P.C. we understand how overwhelming a trespass charge can be. However, our experience and skill has given us a reputation as a law firm that means business and who strives to achieve the best possible outcome for each of our clients. Because we only accept the cases we have the bandwidth to support, you can rest assured that your case gets the attention it deserves.

If you or a loved one have been charged with a trespass offense, contact our law offices today for your free consultation with an experienced criminal defense lawyer.