WHAT TO EXPECT AT YOUR ARRAIGNMENT IN NEW YORK 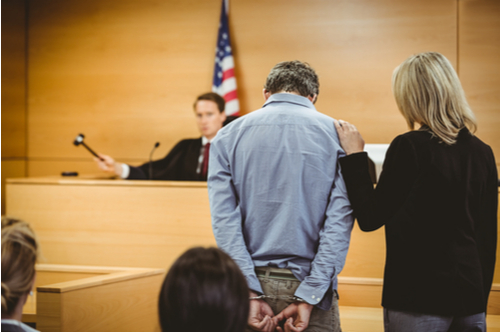 If you or a loved one has been arrested in New York State, the criminal process and overall judicial system can be overwhelming. From the moment you are placed in handcuffs and read your rights, your entire life has been forever changed.

For many, the legal process is not fully understood. After all, how many people research the arrest and legal process on a whim? Below, the professionals at The Law Offices of Michael H. Ricca P.C. help to explain the very first hearing you will undergo: the arraignment.

THE FIRST 24 HOURS AFTER YOUR ARREST

The first 24 hours after your arrest may vary slightly according to the jurisdiction, however, they tend to follow the same general timeline. That is unless you were arrested immediately prior to or during a weekend. Then this timeline may be stretched to 48 to 72 hours.

When you arrive at the police station, you will be fingerprinted. Your entire criminal record will be pulled by law enforcement based on your identification and fingerprints. After that, you may be further questioned or simply taken to a jail cell.

WHAT HAPPENS DURING AN ARRAIGNMENT?

Your arraignment is not your trial. Witnesses, testimonies, and evidence are not presented during your initial arraignment. In fact, the most important decision that may be made during your arraignment will be what happens to you between your arrest and the criminal trial.

Your arraignment, which will typically be held before a criminal court judge, will determine whether you are released on your own recognizance, detained until your trial, or released pending receipt of a bail or bond payment. You will also be read the full extent of your charges.

Other decisions and opportunities may also be presented at your arraignment. These decisions are made based on a number of factors including the charges you are facing.

Misdemeanor offenses are those crimes that may result in between 16 days and one year in jail. This is true whether you are facing a Class A or Class B Misdemeanor charge. Fines, probation, and other penalties may also be assessed. However, those decisions are made at a later date.

During a misdemeanor arraignment, you may be given the opportunity to plead guilty. However, this is not the only opportunity you have to plead guilty. In some instances, the prosecution may allow you to plead to a lesser charge. You should never plead guilty to any criminal charge without consulting with an experienced criminal defense attorney.

Felony offenses are the most serious types of crimes you can be charged with in New York State. Felony offenses are divided into six different classifications ranging in the severity based on the crime: A-I, A-II, B, C, D, and E. In addition, each of these classifications are divided between violent and non-violent offenses. Felony crimes are those that may result in incarceration that lasts for more than a year.

In some situations, the District Attorney may offer reduced charges if you plead guilty during your arraignment. This tactic often includes pleading to a misdemeanor charge instead. Although pleas may be made during your initial felony arraignment, this is actually quite uncommon.

DO YOU NEED A LAWYER AT YOUR ARRAIGNMENT?

Having a lawyer on your side during your arraignment is highly advised. Why?

Before your initial arraignment, a pre-arraignment conference will be held, during which all of the evidence and discovery items may be made available to your attorney. Having your own lawyer with you can be extremely beneficial. In many situations, any evidence the prosecution presents to you will likely feel overwhelming. This can lead to you feeling forced to enter a guilty plea as well as feelings of helplessness and despair. An experienced criminal defense attorney will be able to examine the evidence and strengths of the case. They can help advise you with what to do next.

A waiver of arraignment is not always an option. The court has to agree and you must sign a written waiver stating that you have received a copy of the indictment and are opting to plead not guilty to the charges.

If the judge opts for release based on bail or bond payment, an experienced criminal defense attorney can help ensure the amount is one that you can afford. In many situations, individuals are not able to afford the amount required by the judge and will have to remain in jail while awaiting their trial. A skilled criminal defense lawyer can help prevent this from happening, or can assist your loved ones with find you a bail bondsman to help.

At The Law Offices of Michael H. Ricca P.C., we understand how important it is to have the right representation with you throughout the entire legal process. This includes during your pre-arraignment conference and the initial arraignment.

Having a skilled, reputable criminal defense attorney on your side provides you with the best chances for success to have a weak case dismissed during arraignment. Should dismissal not be an option, however, your experienced criminal defense lawyer will become your first line of defense throughout the entire criminal court process.

If you or a loved one has been charged with a crime in New York State, The Law Offices of Michael H. Ricca P.C. can help you fight these charges. Contact us today for your free consultation at (516) 500-1647.